And Robyn ain't got a dime to spend on such high falutin nonsense.  So Robyn WORKED to get me this guitar, from a neighbor.  Robyn also sucks at surprises... But she kept this one!

The surprise present was a beautiful black rogue dreadnought, 3/4 size, excellent learning guitar, beautiful sound.  Which happened to have a quite broken and quite repaired neck.  So long as you didn't tighten the strings.

Stepfather Mark worked his butt off to try and repair the guitar.  And he did.  And it was solid.  So long as you didn't tighten the strings.  Meanwhile, I did try and learn, and Robyn, hero of this story, went back to work and for a SECOND guitar from the neighbor, which was just missing a string.  It's alright, but it is NOT the Alleged Guitar.  The sound is thin.  Action is high.  It's not as pretty.  But it IS a guitar.

Many assume traditional guitar will be easier for a lefthander, which is why NO LEFTY HAS EVER made a left handed guitar, or restrung a righty, and why all rightys immediately restring their guitars left.

The fretting hand, is, after all, all about strength and flexibility, which you'd have more of in your dominant hand.

Here's the problem:  the strumming hand is all about speed and fine muscle control, and rhythm.

Now for some, this may make no difference.  While I am left handed, I can wrestle a steak right handed out of my best friends fist,  AND cut it up and eat it.  The steak, that is... Not my best friends hand.  He needs that.  The point is every lefty is a little bit ambidextrous.

However, when I tap rhythm, I do it with my left side.  When I clap, I lead with my left.  I cut, bat, throw, hit, hammer, screw, tie knots, and pick up tiny things with my left.  I'm pretty into this lefty thing, is what I'm saying.  So, while I was reacquainting myself with the guitar, I'd throw it upside down and left, for awhile, just to set how it felt.

Turns out it felt better.  So I bought myself a lefty electric, cheap knock off fender style, no whammy bar, one pickup, basic as it gets.  I didn't buy it to shred.  I bought it to learn to play guitar.  I bought an electric because it's a bit easier on the tender princess fingers you find out you have when you start trying to learn.  ( gender is unimportant here, we ALL have tender princess fingers, especially us desk job, geeky types.)

She has no name, though  Craving  will do.  I don't LOVE her, the way I love the Alleged Guitar.  But she fills a need.  I end my workday and ache for her.  She gets touched and played with more than anything or anyone in this household.  My dog is barely speaking to me.  I'm surprised my partner is.  She's a bad affair is what I'm saying... An obsession.  My electric, that is, not my partner.

And meanwhile, the Alleged Guitar?  She has a place on display, and always will.  I love her and sneak glances at her, even as I practice each day, with the electric.  She is the symbol, of hope, of faith, of rebirth, and of someday making pretty sounds.  Her name is Dark Matters and she is helping me to reinvent me.

One more time for prosperity:  best present ever, Robyn. 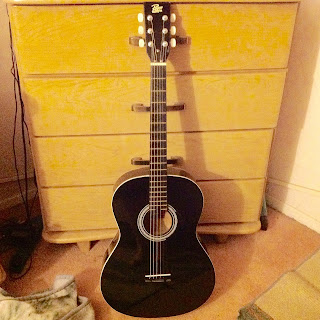 My failed career as a rock goddess

So long ago, and far away, before the million fires of the inter webs raged into the night, back when folks often concentrated on things for minutes and even hours at a time, back then in the dark ages of libraries and FM radio, I... I became a teen.

I'd say if they existed back then I would've been a Goth, but Goths did exist back then, and I wasn't one.  I was considered a stoner, long after any interest in drugs or experimentation stopped.  I'm told I would've been called a Hessian in some circles.

So I was the (totally imagined) cool chick in black leather and jeans, who listened to mostly metal and hard rock, and wrote bad poetry, some of which you've read on this site, ( and you've only just begun, because it's kind of like a bad road accident that you just can't look away from) and was sometimes in bands that didn't really play.  I wanted to be a rock star, because being a poet seemed kinda sissified, and, of course, what I had to say had deep meaning that needed to be shared with the world.

But it was so much worse than that.  You see, I grew up with parents who loved music.  Music was how folks communicated when words were hard.  My Dad was an incredibly talented NATURAL musician, with the voice of an angel, perfect pitch and he played a mean acoustic guitar.  Because of this, the guitar is an almost mystical being to me, comprising my earliest memories, feelings of home, feelings of longing, belonging, expression, connection.  Wow.  That's a lot to put on a piece of wood and some strings, is it not?

He even tried to teach me a bit, but that generally ended in tears and frustration, since I was incredibly stupid, musically.  How stupid?  I have no pitch, I sing off key.  I have no rhythm.  I was the kid they gave the sand blocks or triangle to in elementary school, then took them away because I kept missing my beat.  LOVING music does not equate to talent, it seems.

So I tried, some, but at that age, (14 Ish) I also had:  no patience.  No determination.  A low tolerance for pain.  Arguably, a life.  People to see, places to go, ya know?  In short order, I gave up, accepting my fate as a talentless music lover, and to some degree, set my rock star dreams behind me.

Flash forward 30 odd years:  I have no rhythm.  I have no pitch.  I rarely write actual poems now.  I am fully aware the world has no need to hear what I have to say... It rolls on just fine without my participation.

Now here's what I do have:  patience.  Determination.  An insanely high pain tolerance ( thanks, psychotically angry uterus!).  No life.  Seriously... I've been making a living and raising a kid, and only now that she's grown, have I looked around and said, " right... So where was I?  Oh that's right... Writing, ren faires, music, geekdom".

Here the amazing, freeing part:  I DON'T HAVE TO BE COOL ANYMORE.  That's right.  Not at all.  No one's around to bully me for not fitting in, and if they do, I can call the cops on their ass.  I've done my public service, been a minor captain of industry, paid my taxes, supported others, raised a useful addition to the planet.  Furthermore, that useful addition to the planet will sometimes think I'm cool and other times not, and there's not much left I can DO about that.

This means:  I get to dress like a fool and go to faires.  I get to watch hours of doctor who and Xena, and if you don't like it, go elsewhere.  With today's technology, no one has to watch what I am watching or do what I am doing.  (In my day, kids, video type entertainment could only be watched on a tv, and most houses had exactly one.). I get to write.  I get to post my poems, because it doesn't matter if everyone hates them.  And I get to finally try and learn to play guitar. I would make a hilarious geriatric rock star, so the pressure is off to make something of it.

So that's what I'm doing.  Just carving out bits of love and passion and fun along the way, while not having to worry what they amount to.  And that's arguably, the best place I could POSSIBLY be.

And that leads us to...The Alleged Guitar . 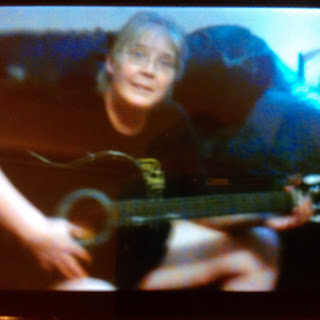 Posted by Unknown at 9:18 PM No comments: 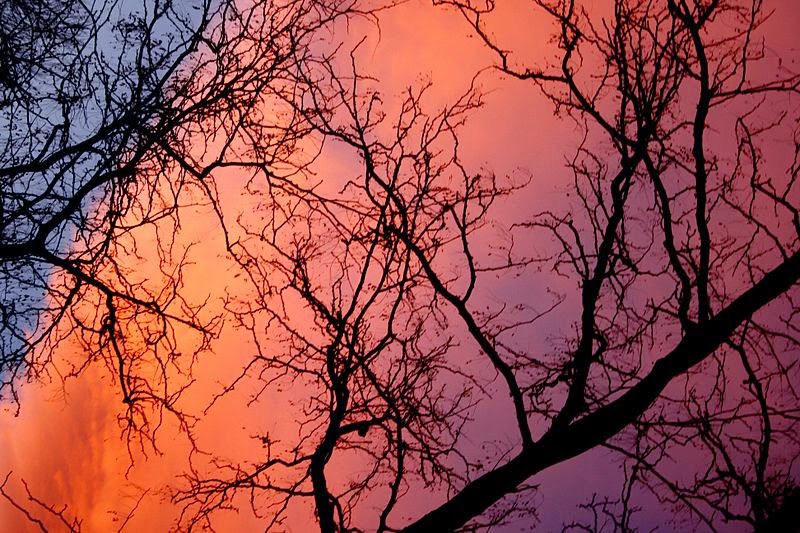 Sunset.
The landscape freeze-frames.
Clouds slow their motion,
and the sun halts in the sky.

All to show off,
for a long slow moment,
this day's quietly gathered masterpiece.

One day for us.
A lifetime for a cloud. 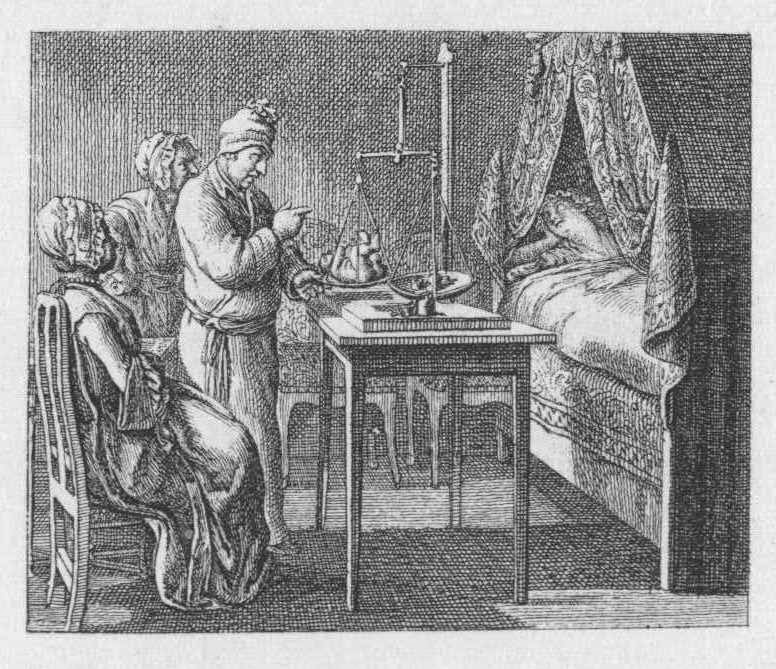 Welcome to the world,
little one.
We're awfully glad you could make it.
And very pleased to meet you, indeed.

You have a lifetime of learning, ahead.
I should warn you,
some of the faster thrill rides
can be frightening.
And there will be bumps and scrapes
along the way.

But time enough for that, later.
For now, it's enough to say
that you have every potential in the world
right at this moment!

And you are surrounded by many
to love and care and teach
and help you grow.
Sweet dreams
and sweeter wakefulness,
friend.

Posted by Unknown at 6:52 PM No comments:

Completely Optional-Give us a hand keeping it going...

mu·tu·al
1.(of a feeling or action) experienced or done by each of two or more parties toward the other or others.
2.held in common by two or more parties
par·a·dox
1.something (such as a situation) that is made up of two opposite things and that seems impossible but is actually true or possible
2. someone who does two things that seem to be opposite to each other or who has qualities that are opposite
3. a statement that seems to say two opposite things but that may be true

No matter what anybody tells you, words and ideas can change the world.-Dead Poet's Society

No one likes labels-but here are some anyway

Voted Most Likely to Succeed

Where Else can you find me?